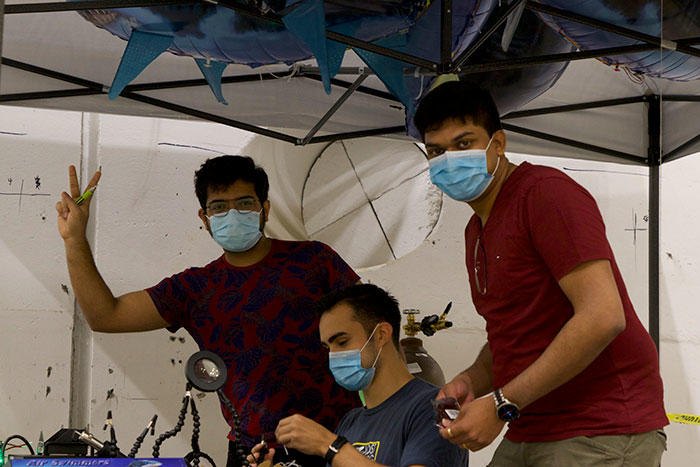 Left to right: Dinesh Karri, Robert Hooks, and Joseph Matthew Prince getting ready to compete at the Luftballoons competition at Indiana University.

It’s a bird, it’s a plane, it’s a Lighter-Than-Air (LTA) robotic shark blimp, which is what a team of George Mason University students and faculty used to participate in the 99++ Luftballoons Competition at Indiana University on November 9 through 13.

“LTA robots don’t need any support to hold them in the air. Helicopters need propellers, but all LTA robots can stay in the air on their own. Instead, they need controls to move them about in the air,” says Mason graduate student and competition teammate Joseph Prince Mathew.

Each team had defenders and seekers to protect their goal and score points against the other team. “It got pretty competitive,” says Dinesh Karri, another team member. “But it was so much fun.”

Every team played each other, and the teams with the most points faced off at the end of the five-day event. “Unfortunately, we lost, but we had the most points overall throughout the week,” says Mathew.

Mathew and Karri were working with Assistant Professor Feitian Zhang to develop an underwater glider as part of their PhD studies when they found out about the opportunity to bring their skills to the air. “It was a change of medium, from underwater to air. The dynamics are pretty similar,” says Mathew.

Robert Hooks, a junior undergraduate electrical engineering major, jumped on the project because of his interest in robotics and autonomous systems. “When I heard about it from one of my professors, I was very intrigued. It was a valuable and fun experience to learn hands-on,” says Hooks.

Hooks, Mathew, Karri, Assistant Professor Cameron Nowzari, and PhD student Chris Taylor all took precautions when traveling to Indiana and during the competition. “There were a lot of protocols in place even when we were competing, we were far apart from other teams,” says Karri.