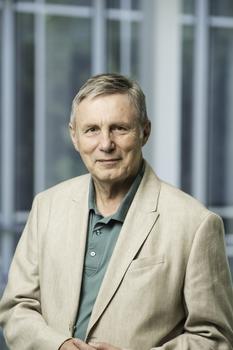 Professor Andre Manitius, of the Department of Electrical and Computer Engineering (ECE), received the David J. King Teaching Award at the university’s Celebration of Teaching Excellence on May 2. This award is given annually in recognition of a sustained impact on the excellence of teaching and learning at George Mason University. The award recognizes the vision and leadership that supports the excellence of teaching and learning, rather than classroom teaching alone and it is given once a year to one faculty member who has worked at Mason for at least twenty years.

Manitius, who has been at Mason for 34 years, was recognized for laying a foundation for sustained and lasting impact in multiple departments as well as at the college and the university. His nomination highlighted how he has focused on holistic and sustainable change. For example, he not only led to the creation or substantial enhancement of degree programs -- such as the BS in bioengineering or the MS in applied information technology -- but he recruited diverse faculty for those programs. He also mentored those new faculty and developed or supported administrative roles such as associate chair for graduate programs and departmental ABET ooordinator to support the work of faculty and students in those programs. Finally, he built strong partnerships with industry leaders to give them ongoing feedback.

Manitius’s vision and coordination was crucial in establishing the first MS program in computer forensics in the nation. The MS in computer engineering, one of his early projects, is now poised to be a centerpiece of the College of Engineering and Computing and its work with the Tech Talent Investment Program to increase the number of students with computing degrees in Virginia. Manitius’s forward-thinking mindset extends to his teaching as he was an early proponent of computer labs to promote hands-on instruction in programs like MATLAB, one of the early participants in a China 2+2 structure, a strong supporter of project-based learning, and an early adopter of asynchronous online pedagogies.

As he helped grow student enrollment in programs like information technology, Manitius also hired and supported new academic advisers, and helped coordinate the program to ensure a smooth and sustainable pathway for students in Northern Virginia to matriculate at Mason. By doing this he helped create strong foundations on which others can build.

“I feel very honored by this award, which reflects favorably on the ECE Department. Whatever I did to deserve this award is owed to a great collaboration of the ECE faculty, for which I am thankful,” says Manitius. He says his outlook on his teaching career can be summed up by the words of Robert Louis Stevenson, a 19th century Scottish novelist and poet who said, "Do not judge each day by the harvest you reap but by the seeds you plant."